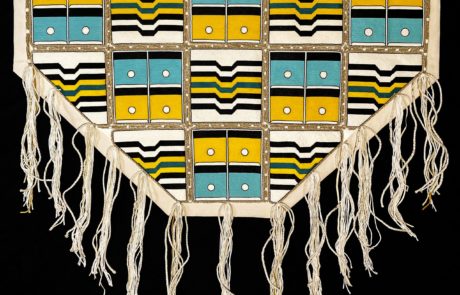 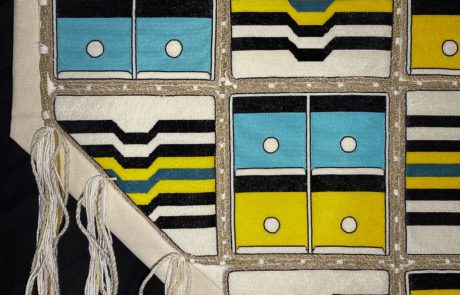 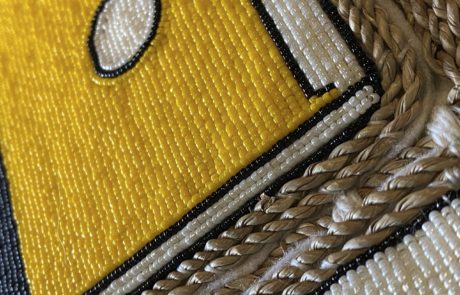 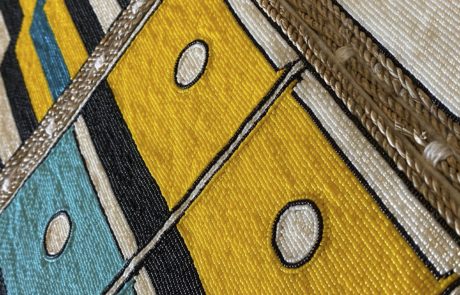 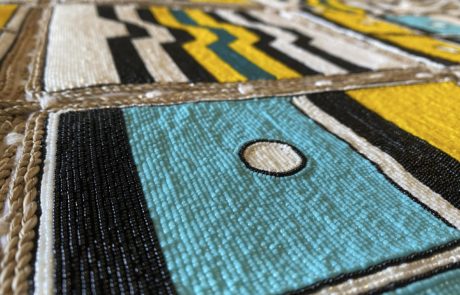 This beaded Chilkat design wall hanging evolved from an initial whim of making a beaded Chilkat robe. After the 2016 Sealaska Heritage Juried Art Show where I received an honorable mention for two pieces I entered, the idea for this piece began: What would it look like if a Chilkat design was done with beads rather than weaving?

The design is beaded in separate squares on wool felt using 3-cut size 15 beads and each square has approximately 27,000 beads; the entire piece has approximately 350,000 beads. The squares with the yellow and blue are easily identifiable as Chilkat designs. The squares with the lines are of a butterfly design. Initially I had wanted to do a formline butterfly in the middle of the piece, but realized as the piece progressed that I wanted to keep the integrity of the designs used in weaving.

Normally, when I bead, I put four beads down and go in between the two middle beads so my beading is flat, but I had the idea that I wanted it to resemble a Chilkat blanket and thought that I could make the piece look like it had the texture of weaving by putting three beads down at a time.  Four diagonal pieces were also beaded to fill in the angles of the bottom of the design.

Once all beading was complete, braided spruce-root rope was sewn twice around each section. Once done, two, three, or five strands of the braided spruce rope were twisted together and sewn around and in between all of the sections.

I wanted to incorporate the warp and weft normally used in weaving and this is evident in the covering of stitches around the entire piece and in the fringe.

Now that this piece is complete the initial idea I had envisioned in my head and the rough sketch I did back in 2016 are almost an exact replication of the finished piece; the sheer weight is surprising and I can only imagine the actual weight a full size beaded robe would be.

Juror comment: An experiment, and difficult to execute in beadwork. Amazing and precise beadwork! It is too bad it is too heavy to actually use as regalia. It is fun to see sections of Chilkat weaving pulled out of their usual contexts … especially the wing-like geometric sections usually found on the backs of tunics. Chilkat design in beadwork is very rare, but it occasionally appears on old pieces. The beads are fit so tightly together.

President’s comment:  A unique and extraordinary piece of artwork that represents and embodies the highest standards of the Northwest Coast art tradition. This piece epitomizes this year’s energy, innovation, and deep-rooted lineage.